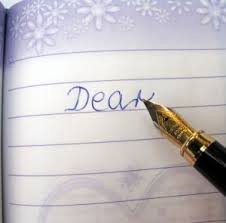 This is a lovely therapeutic one.  I’ve done it loads of times without even realising it was called something and better still, had a purpose.

It does exactly as it says on the tin; write letters but don’t send them.

Or to be more exact and 21st century, write emails, blog posts or Facebook replies.  I have written tomes, thousands of words and deleted them all without sending any.

Well, for a couple of reasons.

The first one mainly is because once it’s written and I read over it, I always think jesus, I can’t send that!

I am afraid I will upset or offend someone if I’ve been too honest or too contrary and so I delete the message.

But I feel great.  It’s very therapeutic.  I’ve gotten a grievance off my chest and no matter that it was sent to cyber space; it’s achieved its purpose.

You can write it out longhand and then rip it up afterwards.  All that aggressive shredding.

Or if you’re of a mind to, set it on fire.  Burn the shit out of it.  Set fire to your anger, hurt or upset and then rid yourself of it in a cleansing fire ritual.

Take the 21st century approach and type it all up on Microsoft Word, highlight it and hit the delete button.

This is the way I do it but I have to admit it doesn’t sound half as satisfying as lighting a fire. 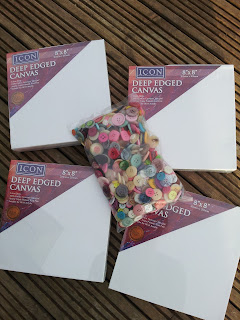 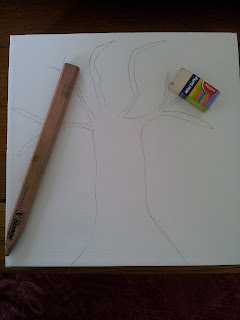 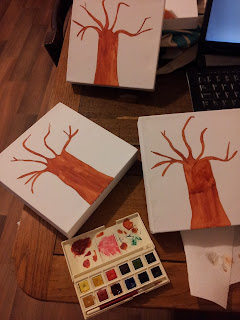 A Plague on Our House

Smallest Boy has chicken pox.  The spots appeared on Thursday last.  By Saturday he was covered.  And more were appearing.

Saturday night saw him waking every twenty minutes to cry loudly and scratch his head violently.  He couldn’t bear to wear his nappy.

He finally fell into a hot and sticky sleep at 4am on the floor beside me on a rolled up duvet.
To wake again at 5.30am.  For the day.

He didn’t nap. He couldn’t.  Mister Husband and I took it in turns driving so he could snatch twenty minutes here and there.

I was pouring calamine lotion all over him as per his screaming requests.  Anything stronger was not advised as his skin was broken at this stage.

My go to children’s pain killer was also reputed not to be compatible with serious Chicken pox cases as it could cause a mild complication.

I have never used strong sleeping or teething medicines on the boys.  They frighten the life out of me.

But Sunday I was desperate.  Desperate for Smallest Boy to find relief of some kind so I gave him a strong anti-histamine and hoped for the best.

Before he went to bed I gave him another dose.

He was asleep beside me at 9.30pm, heat radiating from him.  An hour later he woke, agitated and started to tremble violently. His arms stiffened and his heart beat was rapid.

He was roasting to the touch.

I lifted him and he immediately put his hot, sticky head on my shoulder and fell asleep.  Still shaking violently.

It stopped after maybe fifteen seconds and I placed him back on the bed beside me.  Half an hour later saw a repeat of the same thing.    And yet a third time later.

I scanned the leaflet with the anti-histamine and according to it he was having a reaction.

An ambulance was called and we were taken to the hospital.

His temperature went from 39.6 to 40.1.  It had to be brought down and fast.  He was given some medicine in the ambulance and his heel was pricked for sugar levels.

Smallest Boy was so exhausted he just sat, sweating in my arms, all the while to the hospital.  Totally unaware of what should have been the biggest adventure of his little life so far – a ride in an ambulance.

At the hospital, his high temperature was found to be the cause of his febrile tremors.  He was admitted overnight for observation and some anti-bio tics.

For the first time in over twenty four hours, Smallest By finally rolled over, as much as the intravenous drip in his arm allowed, and settled into a deep sleep.

Due to his chicken pox we were in an isolation chamber.  We could not leave the room which didn’t matter on that first day.  All he wanted to do was sleep and stay in my arms.

By 7pm that night, there were definite signs of him perking up again.  He didn’t sleep until midnight and then woke at 4am to shout out the window at the ambulance drivers down below.

He was asking about his brothers and his daddy and wanting his shoes so we could “Go! Go! Go!”

Uh oh.  Trouble ahead.  I spent the next day desperately trying to entertain him and keep him in the room.

It was looking like they wanted to hold us for another twenty four hours.  After a bit of desperate persuasion, we were finally allowed to go home after 38 hours of isolation.

I didn’t know parents aren’t fed in hospitals.  There was a parents lounge where tea, coffee and toast were available but Smallest Boy was not allowed come with me.

A night duty nurse brought me in a cup of coffee and two slices of toast.  Smallest Boy’s appetite had returned but he very kindly left me half a potato one day, five peas and a thread of chicken.

It was time to go home.  But first we had to stop off for a rather large bag of drugs on the way.

I don’t know how his two year and three month old body is coping with a sudden and massive very first introduction to drugs.  He was having two anti-bio tics and an anti-viral drug every 6 hours in the hospital and we were instructed to continue this four times a day at home for the next three days.

We took our little sheet of sandpaper home where he was re-united with his beloved Juno and bubble lawn mower.  He didn’t go to bed until after 11pm last night and woke at 10.30am.

Our boy is back.  And at home where he belongs. 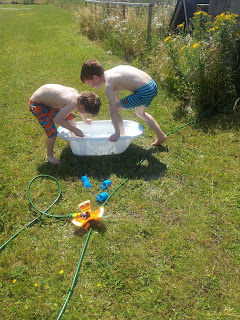 I know because there are:

Water, smoothies.  Flip flops, bare feet.  Sleeping under a sheet, sleeping in underwear.  Cool showers at the end of a day, cool showers to start the day.

And the best bit?  According to Met Eireann, this fantastic weather is set to continue for the next three weeks.