The Toddler Strapped to my Chest

So this toddler strapped to my chest is not a real toddler.  It is my way of describing how I feel when I’m a bit stressed.

I was a bit stressed some time back.  A good bit.

There.  I’ve admitted it.

The toddler I mentioned above was the pressure I felt and the vice grips that sometimes made the breath catch in my throat and rendered me unable to speak.

I had been feeling this pressure ever since the boys went back to school after the summer break.  I would wake in the morning and within five minutes of rising, feel the steady and ominous tightening starting up.

It relaxed a little after the school run but returned at the thoughts of going home.

To the kitchen.  The cooking.  The cleaning.  The fights.  The noise.  The relentless serving of others.  The next school run.  The school bags.  The homework.  The snacks.  The changing of the uniforms.  The cleaning up.  The next school pick up.  The lunches.  The fights.  The demands for food. The bedtime.  The pairs of pyjamas.  The teeth cleaning.  The washing of faces and hands.  The uniforms again.  The laundry.  The last minute bed time snacks.  The bathroom visits.  The bedtime stories.  The eventual silence.

But my mind would still race.

I would spend the day watching the clock so I could finally get to bed to catch up on some sleep; knowing the next day would bring it forth again.

So when I was in my GP’s I noticed a poster for a 6 week course in How to Control Your Stress.

It was great.  The counsellor giving the lectures spoke a lot of sense.  A lot of common sense.

Be comforted in the knowledge that stress is important.  We need a certain amount of it to function.

It is when it gets out of control and we begin to ignore the elephant in the room, avoiding social events, meeting with people and isolating ourselves, that it becomes a problem.

Know that everyone suffers from stress.  Everyone.

But everyone is affected differently and not everyone deals with it the same way.

I learned not to over-analyse everything.  When something happens, feel it, deal with it but move on.

We cannot change the past, have no power over most of our future and only to a certain extent, can we alter the here and now.

On a personal note the things that tend to cause me the most stress are unavoidable.

Those things would be my kids and their noise levels and the fact they are time consuming leaving me with little or no free time to enjoy my own hobbies.

Like a lot of things, all the hints and tips looked great on paper but didn’t translate so well in real life.

But that was my problem and I just needed to find a way around it.

So I wrote down a list of everything I do and listed them all in order of importance.

Then I removed the bottom three from my life.  It helped me enormously.

Unfortunately some stresses cannot be removed from our lives and in situations like these, we need to learn how to manage them.

Ultimately we are responsible for ourselves.  But I also think it is vitally important that we are kind to ourselves.

Incidentally the toddler on my chest seems to have clambered down at present.  As much as I enjoyed the course and found it hugely helpful, it occurred to me that perhaps it was the ninety minutes of alone time I benefited from most.

Looking back I also found the transition from summer holidays to back to school difficult.  I seemed to be busier and always in the car.  Maybe it took a few months to adjust.

Either way, my chest feels a lot less tighter at the moment.

Long may it last.

I would like to leave you with a little clip about The Black Dog which is another metaphor for depression.  This came up during the course of my 6 week course and a lot of people identified with it.
Posted by Gwendy at 10:51 2 comments:

I see your 3pm slump and I will raise you a December slump.

There is a bit of a contradiction going on at the moment.  The kids are slightly more hyper than usual, if that is even possible, yet harder to get out of the bed in the morning.

When I say harder, I mean normally they are the first ones up.  I haven’t had to set an alarm clock in years.

A couple of mornings ago, however, my eyes popped open at 7.28am.

The December slump has hit.

The boys didn’t wake until almost 8am and I had to rouse Lovely Liam after that again.

What’s more, they were in bed and asleep well before 8pm the night before.

Our earliest riser would be up at 6.30am. His step outside my bedroom door on his way downstairs always wakes me up.  Across the landing, Smallest Boy usually hears too but will lie quietly for a few minutes.

Lovely Liam will put in a curly, shaggy haired appearance twenty minutes later but it is Oldest Boy who needs to be woken at the last minute due to his night owl reading and Lego playing habits.

Did I mention the December slump?

I think everyone experiences this in some shape or form.

It is the end of a long year; Christmas break is looming but there are still two weeks left until the schools get their holidays.

Excitement levels over the man in the bright red suit are vomit inducing.  Countdown charts to Christmas aren’t working.  Endless adverts and countless Santa’s in the shops just add to the confusion that the day everyone is talking about still isn’t here.

We are waking up to the dark and going to bed in the dark.  The lights are put on at 4.30pm.  Food is of the comfort variety and if you are anything like me, exercise has taken a back seat.

The kids are going to school, coming home, doing homework, eating, going to bed, getting up the next day and repeating steps one through to five.

It does become a bit monotonous.

And of course everyone is saving and watching their pennies because goodness knows Santa isn’t cheap.

So you can see where the December slump comes in.

It’s not unusual to feel a bit low at this time of year.  Add to that common ailments like winter colds and the odd cough.

If our minds are not crying out for a break, our bodies certainly are.

My sister told me she notices it year in year out in her crèche.  The kids get cranky, hyper and just harder to manage.

On a sub-conscious level they know the year end is nigh and they need a break.

At the time of writing this, I had bathed the boys, made hot chocolates, read bedtime stories and tucked them in.   All before 8pm.

Even Oldest Boy isn’t roaming about on the landing as is his usual wont.

All four of them were out for the count within minutes.

Catching up to do it all over again tomorrow. In the meantime we will just continue as normal because what else can we do?

In an attempt to bring the festive feeling a bit closer, this evening we had some Christmas chocolates and we chatted about where we would put the tree.

The December slump might be upon us, but I will do my best not to let it win.

A Miniature Winter Wonderland in Athy


If there was ever a time when I wanted to be a couple of millimetres tall, it was this morning.

This morning standing outside this window display, looking in. 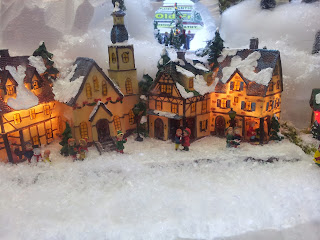 Bradbury’s Bakery on Leinster Street, Athy have outdone themselves yet again this year with their Christmas window.

Since it appeared over the weekend, we have been craning our necks in the car as we pass the bakery shop front on the school run each morning.

For a change I am willing the traffic lights ahead to change, change GO to red so we can stop and have a little look.

The entire window is a perfect winter wonderland with ski slopes complete with skiers, a miniature bakery, a gingerbread house and a Christmas gift shop.  The town’s population are making snowmen, skating on the pond and buying Christmas trees. 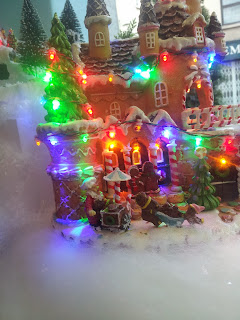 I was hugely impressed with the little cart at the skating pond.  Take a look.

It is my wish come true; a little cappuccino cart.  And if I am not mistaken, he has some warm croissants piled up there too. 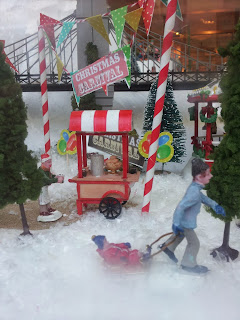 The boys were entranced with the Ferris wheel.  Which moves, by the way.  Round and round complete with teeny tiny passengers and flashing lights.

A little train makes its way through a tunnel up on one of the slopes.

Santa himself is flying overhead in his aeroplane.

It is a magical scene.  No detail has been forgotten.  Even the trees are wearing their winter colours and snow coats.

Every window in every building has a flickering light.  The street lamps are lit.  Some of the houses even have porch lights.  There are even tiny holly wreaths hung up on the carousel at the Christmas carnival. 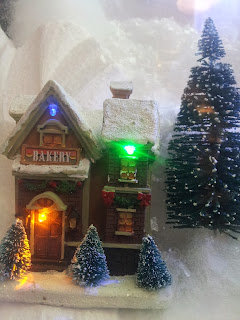 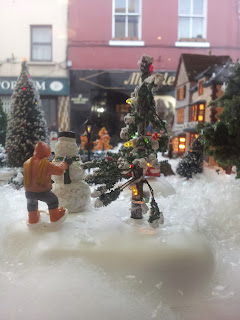 If you are of a mind to kneel down and do a bit of peeking in through the windows of the houses, you will see families inside.

There are several types of dogs running about or just standing still, taking it all in.  Lovely Liam spotted a black lab with a red collar, like our own dog, having a sniff at the bottom of a lamp post.

And just when you think you have seen it all from the street, if you take a moment to go into the bakery, there is still more to see from the other side of the town.

Children building snowmen and beside them two more on a moving see saw.

A little Christmas gift shop with a candy cane entrance and a family buying their Christmas tree. 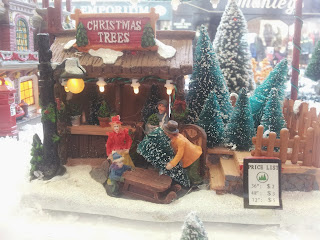 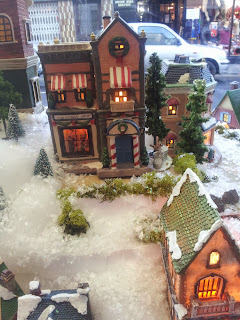 There is so much to see, so many things to point out and after half an hour of looking at it from every angle, we kept discovering something new.

One thing that stood out for me and made the winter wonderland all the more special was the absence of road traffic.

It was a village snow scene with a single train wending its way across the mountain but cars, trucks and lorries were noticeably absent.

The only vehicle I saw was a man pulling a sled with his child on it in front of my friend the cappuccino seller.

It is a thing of beauty.  If you are finding it hard to feel the festive spirit, you could do a lot worse than pop into Bradbury’s of Leinster Street, Athy for a coffee and a scone.

To be eaten in the front of the shop, of course, where the hot drink will warm your hands and body and the snowy winter wonderland will surely warm your heart.

Disclosure:  I took an hour this morning to walk down Leinster Street with Lovely Liam and Smallest Boy with the express intention of showing them Bradbury’s beautiful window display.  It is my pleasure to write about it.  All opinions are my own and I have not been paid to give them.
Posted by Gwendy at 09:57 2 comments: